We are very happy to hear that the online web series, "The Bay" has shot a pilot.  Good luck to Gregori! 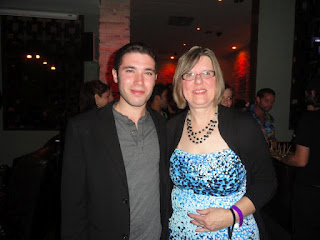 Our Marianne with The Bay actor, Kristos Andrews.

Emmy-nominated THE BAY The Series films one hour TV pilot

Creator /Executive Producer Gregori J. Martin announces the return of the Emmy-nominated and Indie Soap Award-winning serial drama THE BAY The Series!  Martin reports the show recently wrapped production on a one-hour pilot and that Associated Television International (ATI) will be shopping the pilot to cable TV networks.

Behind the scene additions include an impressive roster of daytime talent as, for the first time, the show used a multi-camera format.  Nadine Aronson of ALL MY CHILDREN served as supervising producer and Anthony Pascarelli of THE BOLD AND THE BEAUTIFUL as a producer. Martha Madison and Jade Harlow will be added to the writing team when the series is picked up. Jonathan Reiner, a seasoned producer for multiple reality TV programs including SECRET MILLIONAIRE and THE BACHELORETTE, served as a consultant.  A special thanks is extended to daytime executive producers Julie Hanan Carruthers of ALL MY CHILDREN,  Wendy Riche of GENERAL HOSPITAL, and associate producer Josh O'Connell of THE YOUNG AND THE RESTLESS for their continued support.  Those, in addition to others with extensive production experience, have taken the show to an impressive new level.

You can view pictures from the pilot here.
Posted by Divaofdool at 5:51 PM