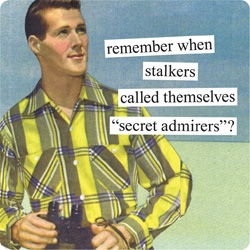 This blog post is not going to be about puppies and rainbows. This blog has never been about puppies and rainbows even though I have had people in the past tell me this blog would be more popular if I stopped calling people out on their shit.  Yeah, it is easier to just be nice and not offend anyone.  But one of the reasons why I created this blog almost four years ago was to expose the awful truth that everyone knows is true, but for some reason, no one talks about it out loud because it is not "polite".

This blog post is about crazy Days of our Lives fans.  This is not about fanbase wars, because that is old news.  I am talking about what no one talks about, how crazy fans are tolerated within their own fan base by the fan base and by the actors they follow.

Why?  Why is almost everyone giving in to the crazy people?  Why are people putting up with their shit?

I am not singling out any fanbase, any crazy fan in particular, or any actor because I see it almost everywhere.  Guess what?  Being nice to crazy people never works.  It divides fanbases.  It causes unnecessary drama.

But Diva, what is a crazy fan?  What do you mean?

Well, let me tell you.  A crazy fan is someone who is so obsessed with an actor that they will do anything to get rid of any fans they see as a threat.  The crazy fan insists on being the number one fan, and they do not want anyone to even be number two.  They do not want to "share" the actor with anyone.  They do not want anyone to have any access to the actor except for them. They will lie, spread rumors, stalk, and even issue death threats to get rid of anyone they feel is a threat.  They cause problems in the fan base because obviously they piss off a lot of people.  No one should be abused because they are a fan of an actor, and that actor might like them back, because it makes someone jealous.

I have no tolerance for actors who put up with their crazy fans abusing their normal fans.  I know it is tricky dealing with crazy people in general because they are capable of anything really.  But, I do not think that is an excuse to give the crazy people carte blanche to abuse others.  The actors can easily squash the abuse by the crazy people by telling them to knock that shit off.  If they do not stop abusing people, they should be shown the door.  I am talking about the actors that know about what is going on in their fan base.  I am sure there are some actors who are totally clueless about the drama in their own fan bases.  I am talking to the ones who know about the crazy fans, and the abuse they dish out.  I am particularly talking to the actors who tell their normal supporters to suck it up and play nice with the crazies because the actor refuses to discipline a crazy fan because they like the publicity the crazy fan gives them.  Any actor who thinks that way is unbelievably narcissistic.

But Diva, why do actors befriend crazy fans when they know they are crazy?

Beats the hell out of me!  I am sure there are some actors who unknowingly befriend fans without realizing they are crazy.  Actors do like to reward fans who promote them with friendship.  The crazy fans tend to do a lot of promotion for the actor because that is what obsessed people do, and it gets them attention from the actor.   I am not bashing all fans who promote actors.  I have done that myself.  I am talking about fans who are so obsessed that they try to hurt others.  Some actors do not realize they befriended a crazy person until it is too late.  The actor gets scared to cut the cord with a crazy fan because they fear retaliation from the crazy fan.  I have seen that happen too.

It is a sad situation.  The crazy fan phenomena forces a lot of actors to not become friends with any fans because they are afraid that a falling out will come back and bite them on the ass.  Or an actor can choose not to engage in social media because they are afraid of their own fans!  Does it not make you glad you are not famous? lol

Ok, Diva.  I see your point.  But what can we do about crazy fans?

I know a lot of people do not like to rock the boat.  We all want our online experiences to be pleasant and not nasty.  Most actors do not like to air dirty laundry in public.  I cannot say I blame them.  My advice to those of you with balls is to try telling the crazy fans in private to knock it off.  The actor should be doing that too.  If that does not work, tell them off in public while the bullying is happening.  If they are bullying you or someone else in public, tell them off in public.  You will be surprised how many positive direct messages I get when I tell someone off in public who is bashing my friends or my callers to our blogtalkradio show in public.  I get a lot of cyber high fives!  You have more people supporting you than you know.

I know people who believe in just ignoring crazy people online.  I do that too.  I block them on Twitter and Facebook.  Sometimes just blocking someone does not work.  It does not work if someone is constantly bad mouthing you in public.  Ignoring them could make you look guilty of whatever crazy thing the nutjob accuses you of doing, and not the innocent victim that you truly are. If you do not care what others say about you, and do not want to engage in a twitter fights with the crazies, good for you.  I do feel obliged to defend my fans when they are being attacked for simply calling in to my show by crazy people.

I am giving the best advice I can after observing how fan bases act online for eight years.  Please share any advice that you have if you have dealt with this problem yourself.  Do not use any names.  I am not interested in seeing fights in the comments section.  Let me know what works and what does not.  But I do believe the actors need to get involved to stop the bullying in their own fan bases.