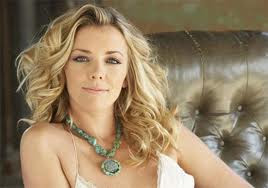 What a mess. Lysie at Daytime Royalty has heard that Christie Clark's return is "not happening now" and that she is cleaning out her dressing room today. I can confirm the cleaning of the dressing room. Yes, when I said last week that she was definitely returning, that was true, then. Obviously something has changed this week. If there was no plans for her to return, then why didn't she clean out her dressing room when she stopped filming in April? I feel awful for Christie and her fans. Initially she wasn't fired, then was, then told she could return, then told she isn't returning soon. Just when you think that TIIC can't possibly do anything to make themselves look more indecisive and stupid, they pull this crap.

In other Caustin news, Patrick Muldoon has been tweeting this week that he's filming a movie. Last night, he tweeted a pic of his trailer. Apparently he's working with Shannon Elizabeth who he tweeted to last night.

Flying to LA to clean out dressing room.I'll send u pics later of my hunk of a mover. Initials PM-Croatian Irish friend!Did I give it away?
Posted by Divaofdool at 10:18 AM