Here are my live tweets during Days of our Lives. 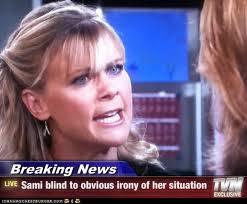 Kudos to whomever made this!


Rehash of before the bang snap goes off in the safehouse. The explosion is still lame today as it was on Friday. #days

The Carvers, Celeste, and Cameron at the Horton Sq. Lexie's tumor is getting bigger. Lexie announces she has made a decision. #days

Austin cuts out a paper heart. Flashback of Carrie saying she wants to make their marriage work. Billie shows up. #days

Austin asks Billie to help him scrapbook. He wants to have them remember the good times. What happened to boxer Austin? #days @nbcdays

Austin tells Billie that Carrie is in love with another man. #days

Lucas and Will are hanging out at the coffee house. Lucas tells Will that Lumi is back on. Will asks if he's kidding. #days

Fire. Shane calls for help. Shane stops Roman from going where the house was. #days

Will asks Lucas if he's lost his mind. lol Will says that Lucas is about to make the biggest mistake of his life. #days

Roman talks into the walkie talkie hoping for a response. #days

Sami tells EJ that they are platonic friends. Sami tells him that she's back with Lucas. #days

EJ tells Sami she plays "musical chairs" with her men. Thanks EJ! Someone needed to say it. #days

Cameron doesn't want to lose his sister. They hug it out. #days

Austin gets his man card back by drinking a beer. Billie tells Austin that things will work out. #days

It cracks me up that none of Sami's men think they were the mistake, it was the other guys that were her mistakes. Whatever. #days

Lucas asks Will if there's anything else bothering him. #days

Shane tries to talk Roman out of killing Stefano. Everyone emerges from the explosion completely unharmed. What? #days

Abe asks Lexie if she will refold the laundry he already folded. Of course she will. lol She can do my laundry too. #days

Lexie doesn't want her family telling Theo about her dying. Lexie has another request. #days

Will doesn't want Lucas in another dead end relationship. Lucas wants to discuss this with Will and Sami. Will isn't interested. #days

Flashback of Rafe finding a fortified basement in the cabin. John wants no one to know they are alive. You mean Rafe didn't think of that?

Will actually does go to Sami's with Lucas. Will wants an apology from Sami for lying and putting herself before others. LMFAO Good luck.

The emergency ppl show up, and EJ. Roman accuses EJ of knowing about the safehouse. Shane wants to gather the family to break the news.

Billie doesn't want to talk about herself, so she brings up Kate and Ian. Billie tells him that Ian hired Kate. #days

Austin asks Billie if she's ok with losing her company. Austin gets a call from Shane to go to the Pub. #days

Sami apologizes to Will, and wants to work things out with him. Will tells her she never changes. Sami gets a call from Uncle Shane. #days

Roman is told that there are no survivors. EJ offers his condolences. Roman tells him to shut up. lol #days

Lexie shares her bucket list with her family. Celeste says she thought the actress playing the wife in the movie looked familiar. lol #days

Lexie wants to get to know Cameron better. #days She tells him she used to be a cop.

Shane fills in Kayla, Austin, Billie, Sami, Will, and Lucas on Marlena's attack, the safehouse, and the bomb went off with everyone inside.

All the emergency ppl have left the area, the six come out of the woods. #days

Everyone starts shouting at Shane. Austin wants to go to the scene. #days

Marlena is against everyone thinking that they are dead. Roman tells Marlena he has to give the bad news. #days

EJ is at the coffee house brooding. A staffer comes in saying the press wants a comment on the explosion. #days

Roman magically shows up at the Pub telling everyone that they all didn't make it. ANOTHER Shayla hug. #days

Pacing is so off on this storyline. The explosion, investigation of the scene, and the announcement to the family should have taken 3 eppies
Posted by Divaofdool at 4:09 PM