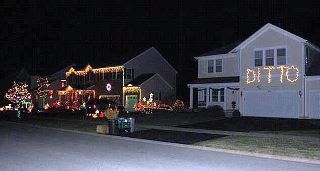 Nicole walks into the DiMansion to see the Christmas decorations, finds EJ under the mistletoe. Lucky girl #days

Will is smirking that Marlena showed up at Sami's to decorate the tree. lol #days

Jack receives a warm welcoming at Jenn's house for tree trimming. NOT. #days

The kids are happy to see Marlena. Sami tells off Carrie for bringing her. #days

Jen needs to let Jack go instead of insulting him constantly.

Major fail that Jack isn't welcome at the Horton tree trimming, but Daniel and Melanie are. What a slap in the face to the Jack fans. #days

Rafe tries to talk some sense into Sami. Good luck with that. #days

Will spikes his drink at Sami's. Now it's a party! #days

So, Abe and Lexie are at the Horton's too.

Nicole gets a "gift" from EJ. He wants Nicole to use Nate Berkus to decorate the mansion when she moves in. Hell I'll decorate it for free!

Carrie announces that she and Austin are staying in Salem permanently.

I wish Will would slip Sami something to drink. Sami goes ballistic when Carrie and Rafe discuss John's case. Where's Roman btw? #days

So Sami didn't want Marlena at her tree trimming. Um, what about her dad? He's Sami and Carrie's father, and the grandfather of the kids.

Yep, Daniel and Melanie got their own bulbs. #days My eyes are going to permanently roll in my head.

Jack flashes back to getting his own bulb from Alice when he and Jen got engaged. awwwwwwww

Why isn't Victor there? BS #days

So I guess we don't get a DiMera Christmas with Stefano, Kate, and the Carvers.

Marlena calls Sami "disloyal." Sami blows a fuse saying that J&M ruined her life. Will calls her a hypocrite.

Chad and Mel bond over dropping an ornament. That has never happened to me even though it's a soap staple.

The Carvers show up at Sami's. WTF? Who would have ever thought that would happen? #days

Nicole tells EJ that he and Sami aren't a match when she shot him in the head. lmfao #days

Drunken Will toasts Marlena and Rafe for being saints to put up with Sami's crap. Austin sticks up for her....

Will reminds Austin that Sami told him that Will was his son for years. About time someone brought that up! #days

Rafe tells Will to apologize to Sami, and sleep it off. Will apologizes to everyone but Sami.

Maggie puts her ornament next to Mickey's, with Victor's on the other side of Mickey's not hers. What da?

Flashback of Tom and Alice putting up their ornaments. awww

Marlena is happy to see Sami. Drunken Will shows up!

Nicole looks for her Christmas package in EJ's pants.
Posted by Divaofdool at 4:12 PM