Diva getting bashed by Crystal Chappell

I don't know why Crystal's tweets are not showing up in my @mentions, but they were initially. A few of her tweets at the end never came to me at all, but I see them on her page. 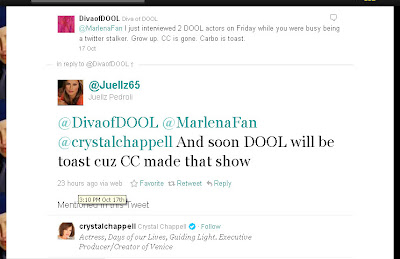 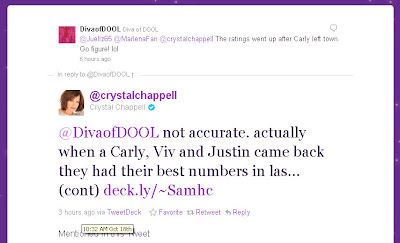 The ratings did go up the reset week from the last week that Crystal was on Days. I'm having a hard time interpreting Crystal's initial tweet to me, but I think she's trying to say that her return brought in bigger ratings. I don't know if that's true or not, but you can't compare any soap's ratings to what they were two years ago because all soaps are down from then. But, the ratings are up since the reset. The ratings are up over last year too. Since Crystal's fans all stopped watching after her last episode, then wouldn't the ratings go down?

Even though my reply which was intended to @juellz65, and not to Crystal, I still don't see why she replied at all. Why does she care to respond to anything I said? Why is she so obsessed with Days of our Lives? Her time on the show is over, move on. Again, she's playing the victim card. She's just standing up to a cyber bully. Blah blah blah. She denies @marlenafan is her fan.

@MarlenaFan Marlena Black
@
@peterreckell saw the tweet a thon today and all of the ?s. How come you did not answer any of the Bo & Carly questions?

Whatever. I've never gotten into a fight on twitter in over a year that I've been tweeting. She has been the center of two previous cyber bullying incidents just the past summer. Grow up.
Posted by Divaofdool at 3:56 PM