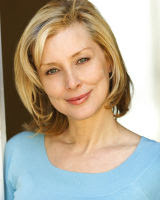 The Diva will interview DOOL actress Valerie Wildman on June 7th at 10 pm est. For several years, Valerie has portrayed Fay Walker, mother of Nicole Walker DiMera. Fay is a woman with a heart of gold despite her unfortunate circumstances. Soap Opera Weekly has hailed Valerie's performance on Days of Our Lives as brilliant. Valerie has also appeared in numerous dramatic and comedic films and television series, including Oliver Stone's acclaimed Salvador, The Falcon and The Snowman, Without a Trace, Cold Case and Nip/Tuck. She had a recurring role on Beverly Hills 90210 playing the love interest of fellow Days actor Josh Taylor. With a strong theater background and numerous stage appearances, she is a recipient of the prestigious Dramalogue Award for Best Actress.

Valerie holds a Masters Degree in Counseling, speaks fluent Spanish and worked as a Peace Corps volunteer. She has counseled young people of diverse backgrounds in various parts of the U.S. and worked abroad as a relief worker through Operation USA. Expanding her efforts to uplift the human spirit into the development of film and television projects, Valerie has created "WildSpirit Productions, Inc.
Posted by Divaofdool at 10:06 AM