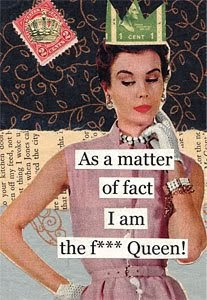 In light of the recent firings today, the Diva cannot help but wonder, "who's the boss?" The show, once again, seems completely rudderless. Lately, the show has been pimping couples, then firing one of the actors in the new couple. What da hell is the point? Why should fans get emotionally invested in new couples/characters when the show changes direction again and pulls the plug on a storyline? Wouldn't it make more sense for the show to throw characters together in a purely platonic way, and see what couple the fans would like to see?

The show began with the rewritten history for the character of Nathan Horton. We never heard of Melissa Anderson having a child while out of Salem. I still do not know who his father is for sure. No one in Salem seems to wonder about this immaculate conception. I might have slept through an episode or two, but if his father is Pete Jannings, then why is his last name Horton and not Anderson or Jannings?

The show, right off the bat, wanted us to cheer for Nathan and Melanie. I never saw any real chemistry there. Before the Parker debacle, Philip and Melanie seemed to have a decent marriage. I got the impression that Melanie's "love" of Nathan was nothing more than an immature girl who got married too young pining over a man she kissed once.

Nathan has been bland since day one, and his relationship with Stephanie didn't change my opinion of him. He had his puppy love crush with married woman Melanie, yet kept banging Stephanie's brains out sometimes twice a night. I just don't feel a hero vibe from a man who pines for one woman while banging another. Nathan proposed to Stephanie out of his own free will. Stephanie and Nathan are chemistry-free also, but they aren't the rooting couple though. The show wants you not to like them. Stephanie turned into a clinging, lying, pathetic excuse of a woman. Nathan strikes me more as a user than a hero. He just used Stephanie, and she didn't deserve that.

My point is, and I do have one, why all this air time for a triangle that ends with Mark Hapka being fired? I picked Nathan/Stephanie/Melanie as the worst triangle of 2010 for a reason. I didn't like either couple of the triangle. Now with Nathan gone, what was the point of this triangle? Did the show decide to pull the plug on a bad triangle, and why do it now? Why didn't they end this triangle sooner? Why not give the "Mate" fans a chance to see their couple happy for a few months and see what happens? This whole thing seems like a total waste of time.

Speaking of total wastes of our time, wtf was the point of Ty Treadway's character? If you read spoilers or the soap magazines, you knew that his character, Ben was intended to be a love interest to Jennifer Horton. They even took publicity photos together looking like a couple. They attempted to ruin the character of Jack Deveraux again by saying he abandoned his family to find himself on a walkabout. It's been obvious that the show doesn't want Matthew Ashford back, but could't they have found a better way to break up Jack and Jenn? The character of Ben will be gone soon. Abby's returning to Salem. So what is the show going to do with Jennifer Deveraux now? Did the show really think we would cheer for Jenn to hook up with a guy who does organ transplants from dead inmates? Ewwwwwwwww! And to make this storyline even more stupid, Stefano is behind the whole thing! Well of course he is. A cat can't get hit by a car in Salem without it being Stefano's fault.

I'm hoping that the show realizes that they are wasting their money with stunt casting. Jessica Tuck and Ty Treadway were total wastes of money. They brought nothing to the show. Wouldn't it make more sense to use cheaper talent for these throwaway roles? Gina Gallego did the best job with her small role. I enjoyed watching her spar with Rafe and Roman. Robin Mattson was all right with her small role too. If there is no chance of any of these characters being long term, what's the point of wasting talent in these roles?

I'm done ranting for today. Your thoughts?
Posted by Divaofdool at 3:03 PM