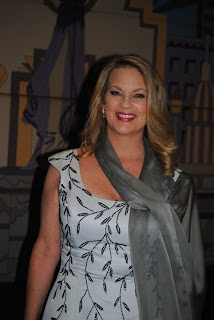 The Diva of Days of Our Lives will be interviewing Leann Hunley (Anna DiMera) on Monday, September 20th at 10 pm est on our blogtalkradio show.  Leann is our first return guest.  Currently, Leann has been filming in the new, independent movie, "Blissful Lies" as the lead role of Addison.  Leann won the 1986 Outstanding Supporting Actress Emmy for her portrayal of Anna DiMera.  Leann also starred in Dynasty as Dana Carrington.  She's also famous for her role as Tamara Jacobs in Dawson's Creek.

We will also chat with Jennifer Brown Thomas.  Jennifer wrote and is directing the movie.

You can call in to ask Leann a question, or leave one in our chat room on our blogtalkradio profile page.  If you cannot join us live, you can leave a question here in our comments section.

UPDATE:  Leann had to cancel for Sunday. The show has been rescheduled for Monday.
Posted by Divaofdool at 2:35 PM