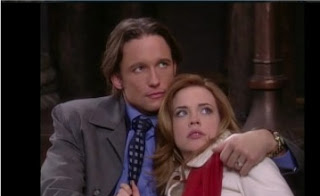 DAYS sinks down another point in the ratings to 2.0. Panic time?

Philip/Melanie/Nathan/Stephanie – For me, this is a #1 reason why DAYS is at 2.0. Almost every day, these characters are forced upon the viewers; and I just don’t get it. All of them are flipfloppers. The ever-whining Stephanie loves Philip…and then she decides she loves Nathan. Philip loves Stephanie, sleeps with Melanie in a fleabag motel and promptly dumps her for Stephanie…and then decides he loves Melanie after all. Melanie dates Nathan, all the while fantasizing about Philip…marries Philip and now fantasizes about Nathan. Nathan takes Stephanie to a ski lodge (hey, at least it wasn’t a fleabag motel!)…but he’s still obsessing about Melanie. With characters that are so fickle and lacking in depth, tell me, Oh-Mighty-DAYS-Brass-In-The-Know, why should the viewers care about any of them? Put your Excel spreadsheets about the 20-something demographics down and take a look at what is going on around you!

Rafe/Benny – My #2 reason why DAYS is at a 2.0. Today Rafe tracks down Benny and gets a real lead about EJ’s involvement. Rafe is a smart detective, but I hate his constant arrogant smirking at Anna, at Nicole, at Benny, at EJ. It gets tiresome to watch after months and months of the same old thing. How many smirking interrogation scenes with Rafe are we going to have to watch?

Vivian - #3 reason. Not because Louise Sorel isn’t a kick-ass actress or that Vivian isn’t fun to watch. Yet Reilly knew how to write for Vivian in a dynamic way whereas the current writer does not now. Vivian at her best was a woman of action. Just like the Rafe interrogation scenes, how many times do we have to endure Vivian lurking about and making pointless threats at Carly with scathing looks…and that’s all? If Vivian wants revenge, she seriously needs to do something about it. Okay, so the Melanie wedding plan fell through. The Vivian I remember would have gone on to Plan B; perhaps once she’s married to Victor this will happen, but it’s taking too bloody long. It was fun watching her brag about marrying Victor today; but Vivian needs to have some teeth again.

Carly/Justin/Adrienne – Could raise ratings or lower ratings, depending on how DAYS plays it. The Carly/Bo pairing has the BOPE fans up in arms. The Daniel/Carly pairing hasn’t exactly set the world on fire. The Justin/Hope pairing has all the heat of an ice cube. But I keep saying that when Carly and Justin are in the same orbit, there are fireworks. The writers should give us some Justin and Adrienne flashbacks, just to remind or introduce the viewers now to who this couple really is. If Justin and Adrienne are going to be in a triangle with someone, I think it should be with Carly rather than Hope. That could be good stuff if played right. Obviously, Crystal Chappell has her fans and her GL followers. I don’t deny that she could have a good storyline, but the whole Melanie/Daniel thing was not the way to go…nor having Bo turn into a brainwashed creep.

EJ/Nicole – Another possible ratings raiser. Okay, as long as DAYS insists on writing Sami as Marlena Lite, then I think EJ and Nicole need to be in one of those on-again, off-again passionate “I love you, I hate you” storylines. Their scene today really worked for me with the cat-and-mouse games. EJ has been so dull in the “friend” scenes with Arianna and with watching Sami continually moon over RoboCop. For the first time in months, I found glimpses of the exciting EJ Dimera who I really used to enjoy.
Posted by Divaofdool at 6:02 AM