This is a big fucking deal 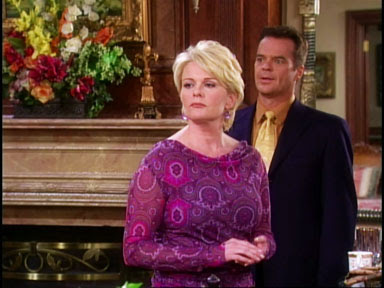 No, not the health care law, Adrienne's back! And she's looking fierce!

Anna/Governor Ford. Anna's kinky. lol Anna stages some compromising photos of the Governor to get him to pardon Nicole. Eventually, he gives in. To show what a good sport he is, the Governinator and Anna test out some of the toys. Thank God it was off-screen! These scenes were hilarious. Excellent acting by Stuart Damon and Leann Hunley. Then Rafe shows up after Anna leaves to ruin it all. Funny how good scenes come to a screeching halt when Rafe shows up.

Nicole/Rafe/Lois. Nicole decides to turn Anna in to Rafe. After some monotonous dialogue, Gov. Ford calls to give Nicole the good news. Nicole and Lois the guard do a hilarious high five celebration. Rafe's stunned. I have to give credit to the casting director for selecting great actors for these minor roles. Lois was hilarious, same with Stuart Damon. Can we keep them? Doesn't any of tptb see that scenes come to a halt with Rafe in them? He's dragging the show down. He's like that guy at the party trying to get everyone to behave. zzzzzzzzzzzzzz

Hope/Justin/Adrienne. Justin gives Hope a coffee. Hope rips his heart out and spits on it. Justin goes back to the K-Mansion. Adrienne is waiting for him. Wow. Judi Evans looks amazing! Love the new look. No more brunette for you! You can feel the chemistry between Justin and Adrienne the second they look at each other. Adrienne is there because Hope told her that Justin is in trouble. Justin insists he's not in trouble. Hope the matchmaker shows up. Adrienne is pissed off with Hope. She thinks that Hope set her up to be humiliated. Adrienne leaves.

Why were the Adrienne/Justin scenes so short? We haven't had them both onscreen in several years. Why can't their fans enjoy them for more than 30 seconds?

Very funny episode over all. Too bad Rafe and the 20something quad sucked the fun out of it. Justin and Adrienne's reunion was way too short. How about some flashbacks of these two? Use those Greek wedding clips to a good use. The scenes with Anna/Governor Ford and Nicole/Lois the guard were priceless.
Posted by Divaofdool at 10:53 PM