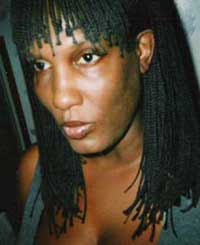 For the last two days, ex-DAYS writer Kola Boof has been on a tell-all Twitter rampage about her time as a writer for the show.  She had served as a ghost writer for James Reilly and "officially" penned two episodes; she also takes credit for creating the character of EJ Wells.   On Twitter, she discussed some of her storyline ideas for the show, citing examples such as  – Billie trying to lure Bo and Hope into a threesome, Abe beating Lexie up into a coma, Alice faking senility to help Steve Johnson, etc. She also made quite a few inflammatory statements against several writers and cast members of the show as well, mostly accusing them of chauvinism and racism.

The writer, also formerly known as one of Osama bin Laden’s past mistresses, has made far too many comments for us to post here on the board. If you are interested, check out her Twitter page and read away.

As always, we’re up for uncensored discussion and debate about what went down.
Posted by Divaofdool at 2:15 AM