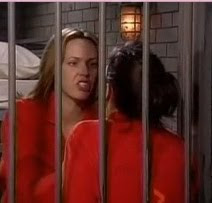 Nicole/Poor Bitch Convict She was Beating the Crap out of/Chloe – We finally get to see Nicole Dimera again as she sits in jail, is visited by Chloe and is still trying to remember who bonked her on the skull. Nicole’s opening scene where she was kicking the ass of her roomie had me laughing my fucking ass off. Yes, it was so funny that I won’t even use the initials. So glad to see Nicole back! Hard to believe she was the same woman who was crying like a little weenie when Sami bitchslapped her last November. Here’s to hoping she’ll open a can of that newly found whoop ass on Rafe and Sami when she gets back to Salem!

Maggie/Daniel/Melanie – Daniel makes Maggie get treatment for her myasthenia gravis and continues to try to bond with Melanie. Both scenes with Daniel were actually pretty good today. If Maggie does ever go cougar, maybe Dr. Dan would be a good choice. Shawn Christian seems to rise to the occasion when he’s actually working with some of the better actors on the show; and in this case, I’d say he was effectively “Rogered”. Unfortunately, Maggie’s scene where she tells Melanie about the return of her illness was effectively killed by Melanie’s bizarre facial expressions. Someone, please tell Molly Burnett to stop! Do I have to Twitter her myself?

Brady/Arianna/Sami/Sydney/Rafe – Arianna’s tale of refusing Brady’s marriage proposal bores him so much that he doesn’t even notice when she leaves his office; and in less than 24 hours reunited with her daughter, Sami wastes no time in pawning the poor kid off on Grandma Caroline.

EJ/Anna – EJ still has more revenge in mind for his Samantha as Anna prepares to leave town. Sure enough, she has to leave that high-heeled boot behind! Anna, throw the fucking shoe away, okay? Anyway, she laughs weirdly and kisses Tony’s picture as she packs up to leave Salem permanently…which was strange behavior for a widow. Dare I hope that maybe Tony is waiting for her in Bora Bora?
Posted by Divaofdool at 5:22 AM