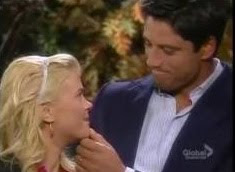 Today’s eppy was dull as dishwater with the exception of the EJAMI scene at Grace’s grave.

Rafe/Arianna – Boring filler for the most part.

Nicole/Chad/Lexie – Hypocrite much? I actually thought Lexie would sympathize with Nicole’s feelings since she also did a baby switch with the help of Stefano almost a decade ago. Instead, she started dissing Nicole to Chad. Whatever.

EJ/Sami – The best part of today’s show. While I like EJAMI fights, it is nice to see them bond over Grace and not be at each other’s throats. A light at the end of the tunnel…or a little bone to throw to the EJAMI fans before we have another year of 24/7 SAFE?

Stefano – God, it takes a lot to make Stefano boring. But whoever was responsible for this yawnfest of today’s episode made it possible.

Philip/Melanie/Brady – Brady gave Melanie good advice, but it’s a waste of everyone’s time cuz you know she won’t take it. But even though he’s a jerk, I have to say that Philip was a nice selection of eye candy today.
Posted by Divaofdool at 11:14 PM