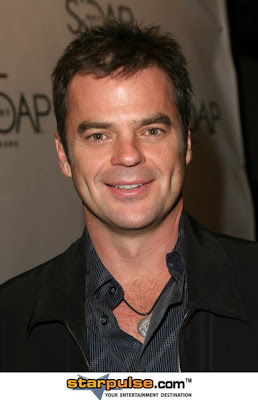 Winner of the Week: JUSTIN KIRIAKIS. He had me at “Hello Everybody”. At the sight of that grin and those dimples, the 1980s fangirl in me couldn’t help but smile at the sight of Wally Kurth. Yes, I’m still pissed off about Drake and Deidre and Stephen and Mary Beth and Thaao and Leann…but even so, it’s nice to see Wally there. He probably won’t get any decent scenes while he’s in Salem, but at least he’s a reminder of what DAYS was before it started to suck.

Loser of the Week: STEFANO DIMERA. So much for big goals like faking deaths, planting bombs all over Salem, inventing alter ego clones, et cetera. Now Steffy spends all of his time trying to break up SAFE. This face-off with Rafe just proves my point that DAYS is trying to make him Roman Brady 5.0 (not to be confused with Wayne Northrop 1.0, Drake Hogestyn 2.0, Wayne Northrop 3.0 and Josh Taylor 4.0). The villain of the 80s would never pay Dr. Baker any blackmail money; he’d just kill the bastard. The Phoenix really needs to get his mojo back.

Scene of the Week: EJ AND LEXIE AT GRACE’S GRAVE. EJ admits to Lexie that Sami still lingers in his mind. Nice to see EJ actually do something besides be snarky and bicker with Nicole day and night. And I swear the ghost of Michael Jackson was singing “I Just Can’t Stop Loving You” in the background of the graveyard.

Performer of the Week: SUZANNE ROGERS. Although I’m trying to wrap my mind around the idiocy of Lucas still socializing with Kate while treating Maggie like she’s a mass murderer, Suzanne Rogers actually made me care. It would be a shame to see the long friendship of Maggie and Lucas destruct over the likes of Danloe.

Line of the Week: Justin – “And let me get just one thing straight before we get started. I’m a Kiriakis. I don’t lose.”
Posted by Divaofdool at 10:58 PM