Someone's been drinking the Kool-Aid part 2 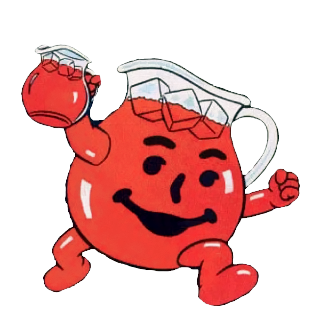 The Kool-Aid man is not a racist! lol

The dude on youtube has responded to my blog about his ramblings. He actually played the race card on the Diva. Since he's so found of Wikipedia, he should look up references to "drinking the Kool-aid." It is about Jim Jones and his cult followers who drank poisoned Kool-Aid and died. The saying has nothing to do with race.

Oh great, let's talk about Crystal Chappell again. Corday said that CC was "not in the same store" with the DOOL actors he fired. Thus, she's paid a lot LESS than them. But this guy thinks the exact opposite. Yes it is an insult to fans to hire an actress that doesn't have a fanbase on DOOL to replace 5 actors that do. CC's popularity did not save GL even with the massive amount of press she gets for kissing a girl once. Oh, and the ratings have gone down since Tony's death week. That week, the show had 3 million viewers, and hasn't hit that since. It's safe to say that 1/2 million fans tuned out after the ten millionth death of Tony DiMera.

Sorry, I've never been to the Kool-Aid drinkers site. Someone posted 2 links of his here in the comments section. It could have been himself doing it to get publicity from me. lol

Posted by Divaofdool at 8:05 AM