Keeping up with Michael T. Weiss 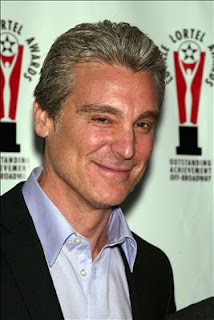 Long before the days of Dr. Dan, we had Dr. Mike! Before Dan with Chelsea, Kate and Chloe…we had Mike with Robin, Janice, April and Carrie. My favorite Mike Horton version was played by Michael T. Weiss, who has since gone on to become famous as THE PRETENDER. However, he’s also building a nice little niche for himself doing theater. Since his days as Dr. Mike and Jarod, he’s also been doing a lot of regional theater and has been doing more and more theater in NYC.

In 2007, he starred in the play SCARCITY with Kristen Johnson at the Atlantic Theater Company. Any fan of Dr. Mike’s would hardly recognize him as the washed-up alcoholic football player with a sleazy side. He then starred in his Broadway debut in IMPRESSIONISMS this year with Joan Allen and Jeremy Irons. In this, he played the object of Joan Allen’s affection; alas, he only had eyes for the painting that he was buying. Unfortunately, the show did not set the Great White Way on fire and closed early. However, Weiss was featured in June 2009 VANITY FAIR in a photo shoot with the “25 hottest” theater stars of the season. He also recently gave a reading at Word Theater in NYC with Sarah Paulson, Ben Foster and Carla Gugino. No news yet about what’s in store for him next…but hopefully he will be back on stage soon. Reports are that he is a really sweet in person…and tres tall. The Diva’s kind of guy…who only gets better with age!

You may not know this but Michael not only acts but is also a fine painter. Here is a link to his gallery of art that is available for purchase.


Also, check out his MySpace page and fan page on Facebook.

Posted by Divaofdool at 6:58 AM