That Douchebag is my dad 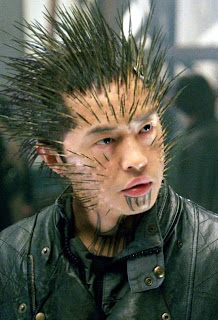 Miles has some other secrets he's keeping.

Ok, The Diva's dad is not The Douchebag, I'm talking about Lost last night. Miles reveals to Hurley that Dr. Chang from all the Dharma videos is his dad. I had low expectations for this episode. The show pretty much lived up to my low expectations.

Once again, we have another Lostie with a dad issue. Kate killed her dad. Jack's dad was a womanizer/alcoholic. Locke's dad tried to kill him. Sawyer's dad killed his mother and then himself. Penny's dad is Widmore. Sun's dad is a mobster. Jin was embarrassed by his dad, and claimed he was dead. Ben's dad is an alcoholic. It's hard to find a character on this show without a dad issue. That's getting a little old.

Basically, we find out that Miles had his "talking to the dead" ability from an early age. His mother tells him that his father is dead, and he won't find the body before she dies. We see him doing his psychic thing will mourning people. Naomi recruits him to talk to the dead on the island to find Ben. I'm not buying that. Why would the dead know about Ben's whereabouts? I think Widmore had other plans for Miles.

Hurley, once again, steals the show. He tries to get Miles to reach out to his father. Miles at the end finally opens his mind to the idea. It would be nice to see an attempt to reconcile with his father, but this is Lost, so we know it'll end badly. lol

Rodger suspects Kate of kidnapping his son. Blah blah blah Jack covered for her which was nice. One of the Dharma people got the surveillance tape of Sawyer and Kate driving away with Ben. Yep, they are in trouble.

We do get to see the Orchid and the Hatch stations being built. The Dharma guy who died must have had his filling kill him because of the electromagnets in the area of the Hatch. I don't remember, is the Hatch the Pearl or the Swan station? Looks like soon we'll find out the true purpose of these stations.

Oh, and there' s a rumor that Miles has his abilities because his dad experimented on him at the island. That's why his mother fled with him.

Daniel's back. Hurray. I love the actor. We already know he was a part of the Orchid being built from one of the flashbacks. I still prefer Ben v Locke to the Dharma stuff.

ICAM with Hurley on "fixing" The Empire Strikes Back. But yeah, Return of the Jedi needed the most work with those friggin awful Ewoks. That's one of my main problems with George Lucas. He constantly sacrifices his own art for a quick buck. All his movies lately have to do with merchandising than good art. For example, the awful Indiana Jones IV movie. Wow was that bad.

I'm not impressed with the preview for the new episode in two weeks. They've been advertising this split amongst the Dharma losties for weeks, and we haven't seen it yet. I'm not sure how interesting next week's Oceanic 6 episode is going to be either. Oh well, all the Lost episodes can't be gems. It seems to this Diva, that the show is starting to become 95% percent filler with a huge surprise the last 5 minutes of every episode. I can do without the big reveal at the end of every episode if the entire episode is good.

Let's hear your thoughts.
Posted by Divaofdool at 10:12 AM