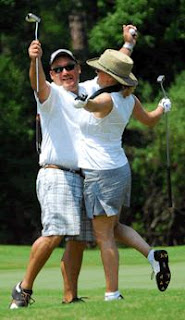 Leann celebrates that TIIC gave her one episode to shoot in 6 months.

The Diva guesses that even actors are not allowed to comment about the almighty JER and his writing style. The JER Gay Mafia was on the rampage this weekend banning posters who dared to defend Thaao. "Uncensored, no holds barred" my beautiful diva ass! Apparently The Douchebag calling the members of the Gay Mafia board "idiots" doesn't warrant a ban, but DOOL fans who think Thaao is correct need to be removed from the board. Well, that's what you get with a board that allows known stalkers as members.

Finally some good news. Leann Hunley is returning for one whopping episode for Tony's murder. It is sad that our standards are so low that we are happy that she's back for only one episode. Thaao's only going to be on for sixteen, and he's the murder victim.