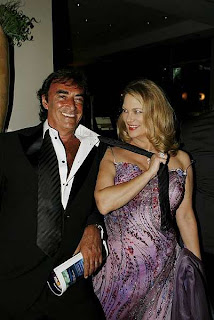 I was listening to some of Daytime Confidential's podcast. Thanks for mentioning The Diva's blog for breaking the story of Tony getting killed off. Sorry, The Douchebag confirming the story isn't worthy of a silver medal. But at least he didn't hold the story for a week like the soap mags did. Soap Opera Digest and Soap Opera Weekly need to be held accountable for holding the story until Corday wanted it out. Thaao's firing hasn't even made their website yet.

With all that being said, The Diva wanted to share HER opinion on Tony DiMera/Thaao Penghlis. Thaao joined GH I believe in 1979. He played Victor Cassadine during the Ice Princess storyline. Victor was imprisoned at the end of the storyline. Thaao's disappearance on that show caused an uproar. Fans were not happy with Thaao being off the show. Fans fell for the gorgeous Greek actor with the Australian accent.

Thaao was contacted to join DOOL as Count Anthony DiMera. Thaao had a blank canvas to work with. The character was his to create. He never tried out for the role. Tony joined Salem as Liz's estranged husband. Despite raping Liz, Tony remained a popular character. His character was redeemed in a sense by his romances with Renee and Anna, and also Liz's forgiveness of Tony.

The Tony/Renee/Anna triangle was big in the day. That's when soaps knew how to write good triangles. Thaao had chemistry with Felice Sempler and Leann Hunley. A lot of fans favored Tony with Renee, but grew to love Tony with Anna when Renee was murdered by Andre.

80s Tony was such a passionate man. He was a ladies' man, amazing lover, sophisticated, and passionate. Tony was unlike the blue collar Brady men and the white collar Horton men. He was born into this crime family that he abhored but loved in a tortured way. No matter what Stefano did to him, you knew that Tony still had a very small, soft spot for his "father". Tony always fought against the DiMera stigma. But that stigma did become useful at times when Tony was passionately angry with someone. The DiMera stigma made him appear to be dangerous. Dangerous can be quite sexy, especially on a soap. Tony would hate and love with the same amount of passion. No matter how mad he got at Anna, the audience knew that his passion for Anna was just underneath that surface, and it could come out when he couldn't control it any longer. The exciting part was anticipating if Tony would lose control over his passion.

The end of Tony and Anna's run in the 80s took a comedic turn. I enjoy comedy in soaps. Who wants to watch gloom and doom all the time? I loved their storylines with Eugene and Calliope. Tony struggled with his stubborn refusal to forgive Anna for falling in love with Andre, while still pining for her. Still, Tony's darkness turned into more of a grumpiness towards Anna and her schemes. The dark prince wasn't so dark anymore. Tony disappeared one day off the pier with Anna looking for him. I rewatched those scenes recently. Yeah, the writing for that was bad. It could have been heartbreakingly sad, but instead it kind of just looked like Tony got mugged offscreen in the fog. Still it was preferable to the crapfest known as the 90s.

Thaao rejoined DOOL in 1993. He was the highest paid actor on DOOL at the time. His return was a big deal. Thaao had a very successful run between his gigs at Days from 1986 to 1993. He starred in movies, tv miniseries, made for tv movies, Santa Barbara, and the Mission: Impossible tv remake. Unfortunately Tony was written by James E Reilly. The Diva knows that some viewers still fondly love JER. To me, he was an asshole who had no problem with being vindictive to actors he didn't like. He turned DOOL into a joke with campy, over the top storylines that lasted too long and made the actors look foolish.

Anyway, Tony took a turn on the very dark side. JER rewrote Tony's paternity back to being Stefano's son with just a passing mention. He could have done it as a major storyline, but it ended up being a footnote to the awesomely lame John and Kristen fuckfest. Dan and Chloe actually make John and Kristen look like a couple with substance. Tony was made into an interloper in his own engagement to Kristen a la Lucas now. Tony became the demented, obsessed DiMera who would stop at nothing to keep a cheating little whore like Kristen. John/Kristen/Tony was one of the worst triangles in the soap's history. No one really preferred either couple to the other. Worse, JER only made a passing reference to Anna in one episode with Tony and Carrie. When Tony said that things just didn't work out.

Then came Aremid. Tony was give a fatal disease. To JER's credit, he gave him a real blood disorder as opposed to all of Jack's phony made up illnesses. Tony comes up with a scheme to set John up for his "murder". Tony commits suicide. Thaao's performance was brilliant. JER did always give Tony "a good death". If you've seen "Legends of the Fall" you know what the reference is about. It's no secret that JER killed Tony because he hated Thaao. During Tony's death, Thaao lost both his parents within days of each other. It has not been widely reported anywhere, but Corday told Thaao that he could come back when Reilly's contract was up in a few months. Reilly re-signed with the show, and obviously he had no intentions of bringing back Tony.

There was a lot of hype for Tony's return to the Penthouse Grille in 2002. I've heard some say the buzz was for a possible Stefano return, but The Diva clearly remembers the commercial running for weeks with Tony being revealed as the returning DiMera. Talk about a splash! Instant drama as soon as the elevator door opened. The other characters had to try to figure out which DiMera they were looking at. Tony or Andre? Tony's story was that he was Tony until Andre impersonated him to set up John as his murderer.

2002 Tony still had his sexy edge. He shared a very passionate tango with Kate. He kissed Marlena and offered to her to "have a go at it" upstairs in the DiMansion. He kissed Sami. Tony was still the irresistible devil. He was back to being sexy and dangerous. There were some lame ass storylines along the way, the goop, Rex's diamond making laser, etc. You did see a new side of Tony when he thought he had fathered Cassie and Rex. He loved those kids, more than Marlena, Kate, and Roman did. Being a father, gave Tony a vulnerable side. He couldn't control those kids like he could the adults in Salem.

Then JER returns. Of course, he immediately killed off Tony again. The tiger stuff was over the top, but it was entertaining. Thaao gave amazing performances at the circus and at the hospital room. Who didn't jump when Tony grabbed Marlena's wrist trying to tell the morons in the hospital room that she killed him?

Then Thaao accidentally outed Marlena as the serial killer in the Israeli interview. So JER punished him again. He made Tony the mastermind of the serial killer storyline. The storyline was so boring and convoluted that I won't even repeat it here. Anyways, Tony ended up in prison in 2005.

2007 brought much promise. Thaao came back as Tony, or so we thought. About a month into shooting, Corday came up with the Tony/Andre idea. Of course it made sense that Tony did not do anything that happened in Salem from 1993 on. All those storylines were really out of character for Tony. The Island Tony episode was one of the highest rated episodes of the year. It was higher than John's death that occurred 3 months later, and John's alive 2 months after that.

Finally, the Tony and Anna fans got their couple back after waiting 21 years. TPTB refused to put Emmy winning Leann Hunley on contract which really handicapped the show writing for them. Once Andre "died", Tony and Anna were sent to the backburner.

2008 started with the Tony and Anna ad wars. I actually liked that storyline. The show should have had Tony pick a better line of business. They should have had Tony compete with Victor. Tony had no competition in town. Other than Kate and Paul Hollingsworth, the ad agency had no real purpose and was dropped. It was a shame because the newer DOOL fans saw what the older DOOL fans liked about Tony and Anna. Tony and Anna drive each other crazy, but they love that about one another.

Thaao was named the first lead actor Emmy nominee in twenty years for DOOL. So Thaao was rewarded with a lame ass marriage proposal to Anna at the Brady Pub. Classy Tony would have never proposed to Anna like that. Tony's last proposal to her in the 80s occurred in the shower! Now that's passion baby. LOL Then Tanna got married off screen about a week later. Then inexplicably, Bope gets a vow renewal onscreen in one of the lowest rated episodes of the year. The wrong couple got the onscreen wedding.

August 2008 should much promise. Stefano was back! The hospital lockdown week was the highest ratings of the year. Then Tomlin came in as producer, and all the vets got sacrificed for the twuest twu wuv ever, Dan and Chloe. Then came the announcement that the show got renewed but must cut costs by 40%. The DH's got fired, and left in a lame way. The show barely got a bounce from their last episode. SN and MBE won't have a final episode, so the show won't even get a bounce from their last episode. Then the show decided in their infinite wisdom to kill off a character that they've killed off numerous times in the past in a 3 week or so murder mystery buildup when no one in town wants that character dead. The Diva is not holding out hope that this storyline won't suck. I'm sure Thaao and Leann (if she's on) will give amazing performances. But what's the point? Why kill off a character that they can use in the future for a short term blip in the ratings for the March sweeps month? As soon as the murder mystery is over, the ratings will surely go down. They could have just had Anna and Tony leave for Switzerland to be with Carrie and Austin who were trying to start a family. They could have brought Tanna back somewhere down the line for another big DiMera storyline.

But the future is bright for Thaao Penghlis. As The Diva reported, Thaao already has a Sci Fi TV pilot named Emissary. Plus he has numerous other projects that he is doing. But as a life long Tony DiMera fan, The Diva cannot help but be bitter on how TIIC wasted an Emmy nominated actor because they didn't want to pay him/write for him. Killing off a one of a kind character like Tony for a lame ass murder mystery is a huge mistake.

The Diva will blog about Leann Hunley/Anna DiMera later. Her awesomeness deserves her own blog.
Posted by Divaofdool at 11:03 AM