This is not the first time either:

Here's a copy and paste because she'll probably delete it. 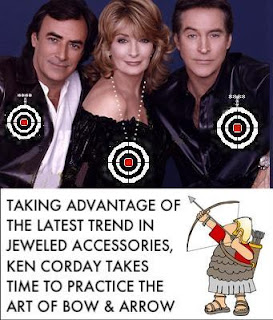 Wawame posted this in the comments. See how creative DOOL fans are? The Diva is sure that Wawame would not mind if this picture was "borrowed" by other DOOL fans.
Posted by Divaofdool at 11:46 AM 8 comments:

The Diva Has Spoken.

This Diva is blogging in her pajamas. I am ready for the drama to be done so I can get some sleep. Without further adieu, the murder victim is... 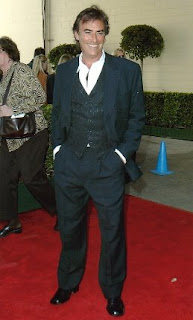 Count Antony DiMera will be killed in a whodunit murder mystery during March sweeps. The first lead actor Emmy nominee in twenty years, Thaao Penghlis, has been fired. Could it be Andre instead? Possibly. Even if it is not Andre now, it could be at a later date. The door is open.

The following is speculation on my part; since Leann Hunley has been offscreen for months and on recurring her entire time on the show, this diva doubts they'll keep her after this storyline is done. But Leann did win a Best Supporting Actress Emmy in 1986, for playing Anna in mourning over Tony "leaving" her. You would think the show would try to get her another Emmy, but knowing them, she will probably stay in Switzerland with Austin and Carrie the entire time.

No rumors about the suspect of Tony's murder other than it will probably be a veteran to cut payroll.

Anyway, I kept my promises this week. Thanks for visiting my blog and posting your comments. The Diva plans on returning to her original intent of the blog which was to comment on DOOL and anything DOOL related tomorrow after a lot of sleep. The intent of the blog is to be able to post uncensored and unmoderated. The Diva got tired of posting at message boards that were overmoderated.

Oh, and Nelson Branco is still a douchebag unless otherwise stated. We all know who posted the spoiler first.
Posted by Divaofdool at 11:38 PM 37 comments:

The Lowest of the Low

Like I have said before, the J&M exit was beyond lame. Well, this exit for a supercouple is worse. In March, one member of a supercouple will be MURDERED. Yep, the show has sunk that low to kill off a veteran during March sweeps. I'm sure you are wondering, Diva, which character would want to kill off a member of a supercouple? Well, this murder mystery is a whodunit. TIIC would have to bastardize the murder victim to justify the number of suspects. If you watch the show now, you'll notice that there is no build up for a murder mystery. That is correct. The build up will be quite short. The actor has been fired.

So where does that leave the widow(er)? I don't know. But I'm assuming the spouse is fired also.

Who could have killed the victim? Rumor has it that the killer will be another veteran. But that is just speculation. What we know for sure is, a vet has been fired, and their character will be murdered in a whodunit in March.

Random thoughts by the Diva

I have to say, DOOL fans are so creative. As an artistically challenged blogger, I am amazed by the fans and their imaginations. I wish TIIC would hire fans to write the show. I saw this banner above recently and had to share. Now, isn't that a better way to express yourself than slashing your wrists? Major kudos to the Steve and Kayla fans.

Even though this blog is less than a week old, the Diva has enough internet prestige to hand out her first ever award: 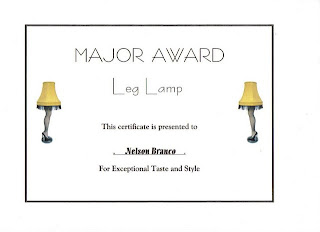 Yes, I am still going to reveal the supersecret March sweeps end of a supercouple storyline tomorrow. It sucks having to wait, but timing is everything. If I get outscooped by tomorrow, I will be a majorly pissed off Diva! In an event, please right click and save the DOOL phone numbers, because they are going to come in handy this weekend. For some people, the spoiler reveal will provide them some relief since it won't be your couple. Don't dream it's over. The bloodletting on DOOL will not stop until TIIC are gone.
Posted by Divaofdool at 11:15 AM 25 comments:

Welcome to the Diva of Days of our Lives

This blog is about Days of Our Lives. And of course, this blog is about me, the Diva of DOOL! Come back frequently to read my opinion on all things going on in Salem, USA.
Posted by Divaofdool at 3:39 PM 5 comments: